(Dayton, Ohio) February 23, 2019 — WHIO-TV Channel 7 celebrated 70 years in Dayton as the Miami Valley’s most-watched television station. Originally on Channel 13, WHIO-TV was not the first station to be granted an FCC license to begin broadcasting but was the first station to actually get on the air in the Miami Valley on February 23, 1949. WHIO is also one of the longest-running CBS affiliates in America, dating back to when the network began to transmit programming across the country.

WHIO moved to channel 7 in 1952 following the release of the Federal Communications Commission (FCC)’s Sixth Report and Order, which reorganized VHF channel assignments throughout much of Ohio and the Midwest. The studio locations spent 61 years at the original location of 1414 Wilmington Ave in Dayton before moving to the Cox Media Group broadcast and media center at 1611 South Main Street. The current location is also home to other media properties including the Dayton Daily News, WHIO AM-FM Radio, and K99.1FM Radio among others. WHIO-TV began broadcasting its newscasts in a 16:9 widescreen standard definition format on April 1, 2007; it was the first Ohio station outside of Cleveland to switch to the new screen resolution.

WHIO has been the primary source of news and information during critical historical events including the Xenia Tornado on April 3, 1974. The F5 tornado killed 33 and injured more than 1300 others making it one of the deadliest weather events in US history. WHIO-TV was also critical to the Blizzard of 1978, where over 12 inches of snow hit the region in one day making it the highest single-day snowfall on record.

WHIO-TV Vice President and General Manager Rob Rohr commented, “The legacy and history of service to the community speaks for itself. As we continue to honor the legacy of the past, our current and future mission is to provide the community with outstanding local news and weather coverage.”

Today, News Center 7 is the only local station with a local weather radar. Jana Collier, Vice President of Content said, “Our local radar is very important to the community. It’s a full two minutes faster than any other weather radars which is critical in occasions of severe weather. ”

As part of the 70th celebration, WHIO-TV aired a special station retrospective which aired on Thursday, February 21st at 7:00 PM. The program, along with extended interviews, pictures, and video can also be seen on the WHIO news streaming app available on Roku, Apple TV, and Amazon Fire.

More information on WHIO’s history can be found at the following link: https://www.whio.com/news/special-reports/whio-marks-years-the-soul-broadcasting-public-service/diq7NO0aDO3Kqc0YxKr3ZL/

WHIO-TV is a media product of Cox Media Group. 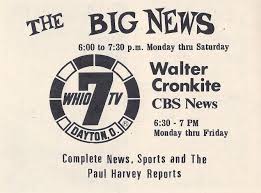